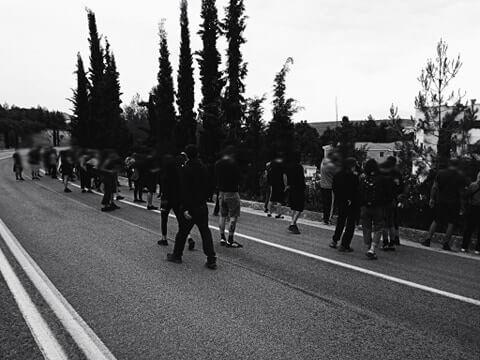 Since 24/05, our friend and comrade, anarchist political prisoner Giannis Dimitrakis is being hospitalized at Lamia with heavy injuries from the murderous attack against him at Domokos prison. At the very moment, it appears that Giannis has overcomed the danger of the first hours. The injuries that he sustained however, have caused multiple hematomas in the head that influence basic functions of his brain.

On the murderous attack against anarchist comrade Giannis Dimitrakis

Since 24/05, our friend and comrade, anarchist political prisoner Giannis Dimitrakis is being hospitalized at Lamia with heavy injuries from the murderous attack against him at Domokos prison. At the very moment, it appears that Giannis has overcomed the danger of the first hours. The injuries that he sustained however, have caused multiple hematomas in the head that influence basic functions of his brain. On Sunday 30/05, many of us gathered outside of the hospital of Lamia. We shouted slogans just a few meters away from his bedroom window to express our solidarity, even though Giannis could not hear us. Since then, his state seems to be improving. For his health to be fully restored, however, continuiing monitoring from specialized medical personell is required for several months. It is obvious that such care cannot be given in the prison environment. 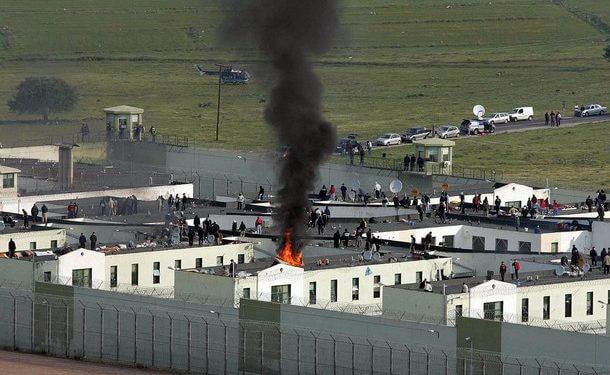 In this critical condition, the scumbags of the New Democracy government, the murderers of prisoners, Michalis Chrisochoidis, Sofia Nicholaou and their substitents, after trying to downgrade and even withhold the incident, decided on Thursday 03/06 the transport of Giannis Dimitrakis back to Domokos prison, going as far as to place him in an isolation cell for covid prevention purposes. The transfer of our comrade there, while his brain functions remain in immediate danger, is basically like a second murder attempt against him. Domokos prison is scheduled to soon become a discipline prison (type C) for political and undisciplined prisoners, although the prison does not fulfill the requirements to support decent health care that is needed for the recovery of a prisoner with such heavy injuries. After the near murder of Dimitris Koufontinas by the government, while he struggles to recover from his recent hunger strike in the same miserable conditions of the same prison, the murderous attack on Giannis is added to this equation as well. As Assembly of Solidarity with political prisoners and persecuted fighters, and as a solidarity movement in general, we are determined not to let our comrade helpless in their blood stained hands. Nothing can stay unanswered, not one of the death policy managers can be left in peace. As an assembly we generally try to see the issue of prisons system not separated but as a part of the big picture of the social and political issue. In the same way, we see the political prisoners as comrades first, but also as captives of the social-class war that always festers in this cruel capitalist world. In the same way, we understand the legal and prison system, firstly as a state policy determined by the class war, but also as a part of the total policy of the economy, health, education and environment as well. In all these fields, state and capital are moving in a neoliberal approach, attempting to demolish what is left as an obstacle in the way of capitalist development. At the same time, they try to silence every voice of resistance and drown every revolutionary prespective and tradition in sorrow. They use propaganda in order to strengthen their violence and dominance policy. Keeping that in mind, we consider both the specific events and the general state of the Greek prison system as social and political events that mirror the situation outside of prison as well.

The assault on Giannis Dimitrakis, a political prisoner for many years, carried out not by prison officers but by fellow prisoners, is unprecedented in brutality. It has to be analysed with political criterias, the criterias on which we try to base our analysis of every fact of the social life that takes place around us. We can’t see this attack as simply another typical prison incident, like as the prison principal of Domokos described it. This was not just another conflict between prisoners.

Those that hit our comrade with murderous intent, did so because he did what is self evident for any antiauthoritarian: he defended the weak against the strong, even if it ment putting his life at risk. They would not have done so however, without the tolerance of state power. Without state tolerance, the dirty micropowers of the prison world, in which an anarchist would never participate, wouldn’t act undisturbed as a mafia group, controlling every aspect of prison for their own benefit as well for the benefit of service and state policy.

The government equates terrorism with common vicious crimes in an attempt to diminish the struggle and identify it with organized crime. Giannis stood against the most vicious part of organized crime, in a moral, as well as practical manner. In that way, the state’s narrative was once again shattered and that is why the government has been covering up the incident. Two different worlds collided at the 24th of May. The world of solidarity, selflessness and equality clashed against the world of cruelty and authority.

The cannibalistic and authoritarian violence, the parastatal and mafia methods of enforcement and enrichment, those are derivatives of the capitalist world, entangled with state policy. Ιn a closed environment like prison, where everything is under heavy and strict control, this is even more obvious. The small groups of power and the various prison mobs act under a tolerance regime in favor of the state. All around Greece their function strengthens the controlling and fragmenting of prisoners, stifling every attempt of struggle, any demands and acts of collectivization.

It is clear that the prison managers and their political superiors are the moral accessories of this brutal attack against Giannis Dimitrakis. They must be very satisfied that members of the prison mafia, a creation of their own, tried to end an anarchist that has been giving many struggles, for almost 2 decades now, in every aspect of the social and class war. An anarchist that was in the front lines of the prison riot in Malandrinos at 2007, who has always fought for the unity of all political prisoners and their connection with the poorer proletarians, as well as unruly prisoners, for raising claims inside prison.

Assembly of Solidarity with political prisoners and persecuted fighters 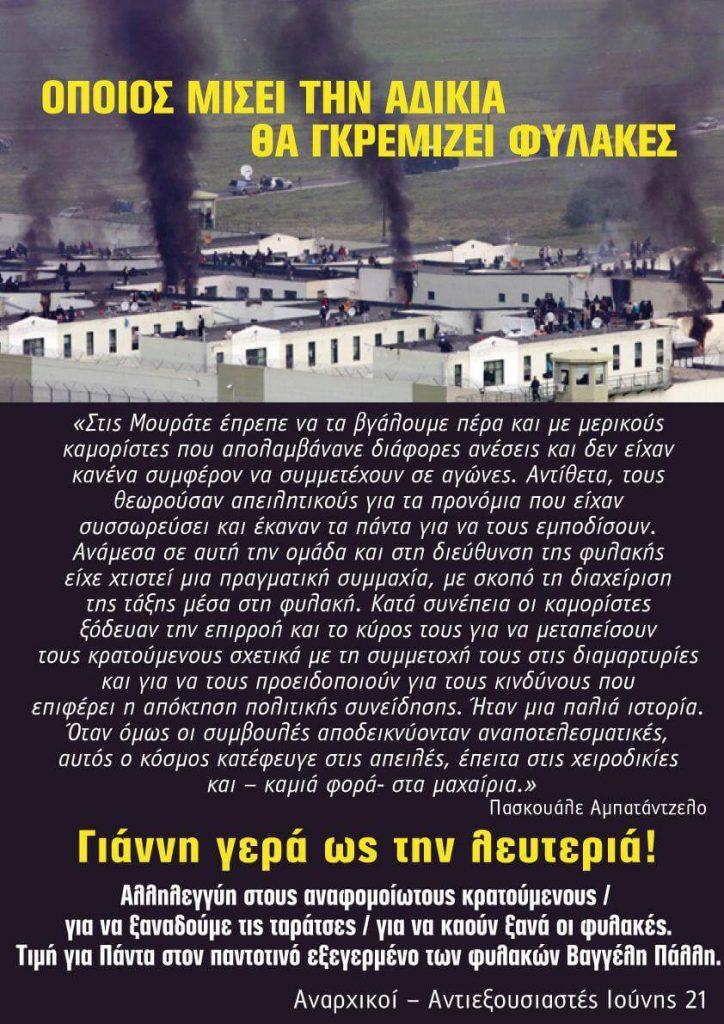