Not the post we wanted to be making, but on July 7th after his communication restrictions expired SIS (special investigation services) from FCI Englewood gave him word that they were renewing the expired restrictions. For another 6 months, Eric will be unable to communicate with anyone who is not family. This will bring him to a total of a year and a half being held incommunicado from the public when this restriction ends. Like the last two blocks this one comes without much explanation other than a general statement about how his communication might pose a threat to the institution and to the public.

Below is his previous communication restriction paperwork 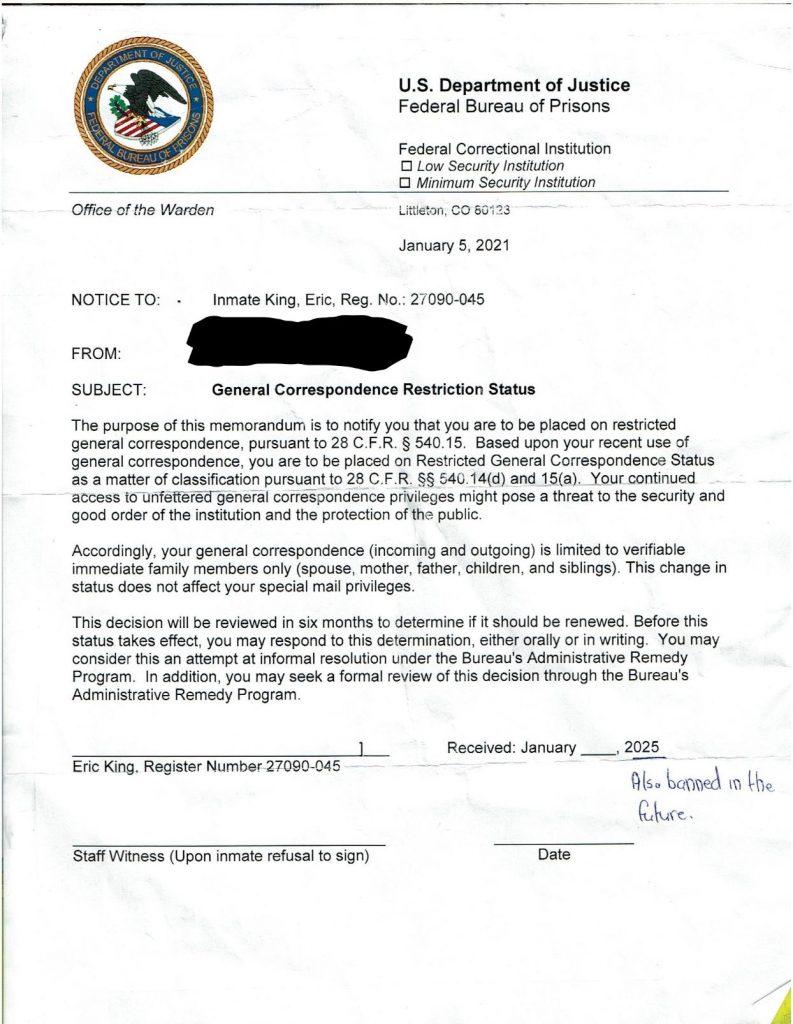 Accordingly, your general correspondence (incoming and outgoing) is limited to verifiable immediate family members only (spouse, mother, father, children and siblings). This change in status does not affect your special mail privileges.

This decision will be reviewed in six months to determine if it should be renewed. Before this status takes effect, you may respond to this determination, either orally or in writing. You may consider this an attemptat informal resolution under the Bureau’s Administrative Remedy Program. In addition, you may seek a formal review of this decision through the Bureau’s Administrative Remedy Program.

The first communication restriction was given to him 2 months into the pandemic.

It’s a weird flex for the BOP to remove a prisoner’s only method of communication with the world 2 months into a global pandemic. (Even though he was approved for visits and the CARES act allowed him to conduct them over the phone FCI Englewood did not provide his first sporadic call until almost a year later. ) The pandemic brought instead of compassion, isolation and a life of constant attack via the federal officers at FCI Englewood.

While this is a typical move when it comes to a prisoner the bureau wants to silence, it is complete deprivation from his community and the outside world.

Today marks 1,056 days of being held in segregation without even a reason.