ITALY: ALONGSIDE NATASCIA ON HUNGER STRIKE, WITH COMPLICITY AND SOLIDARITY! SOLIDARITY GATHERING IN FRONT OF THE COURT OF GENOA

“Lucidly aware of the punitive strategy that the DAP [“Department of Penitentiary Administration”] is putting in place towards me, and at the same time full of anger and disgust, I decided that – if I have no means to concretely interpose myself to their vindictive logics – I have at least the possibility to not let them do it with my collaboration. On hearing the news of my return to S. Maria Capua Vetere, at 6 p.m. on June 16, 2021, I immediately announced the start of an indefinite hunger strike. I know that these decisions are not competence of the administration of the prison, but I don’t intend to eat another bite in this shitty place”.

With these words, Natascia went on an indefinite hunger strike on June 16 when she was informed that she would be transferred to the prison of S. Maria Capua Vetere.

Natascia has been in prison for over two years [May 21, 2019], accused along with two other comrades, Beppe (who has also been imprisoned for over two years) and Robert, of sending three parcel bombs to the former director of the DAP, Santi Consolo, and to two Turin prosecutors particularly dedicated to judicial doggedness against comrades, Rinaudo and Sparagna.

Since the day of her arrest, Natascia has never been passive in suffering the harassment of her jailers: punitive transfers to unlikely places far from her affections and her lawyer, impossibility to communicate adequately with her lawyer to be able to build any kind of legal defence, trials in videoconference, censorship and arbitrary detentions on correspondence, restrictions on visits and out-of-cell time, on music, on books.

They are trying in every way to weaken Natascia’s strength and determination, and at the same time to issue a warning to anyone who decides to stand in the way of their decisions with body, head and heart. Her transfer to the prison of S. Maria Capua Vetere is only the last of the vindictive stratagems implemented by the DAP. The same prison known to the newspapers for the brutal beatings and torture suffered and witnessed by several prisoners and which took place in April 2020, after a protest born in the middle of health emergency to ask for tampons and demand social distances made impossible by prison overcrowding. The same prison that is currently in the news for the 52 precautionary measures issued against the same number of prison guards for the same facts.

Natascia decided to use her body not to suffer passively the long series of infamous actions that the DAP and the direction of the prison of Santa Maria Capua Vetere decided to take against her, and that have been going on incessantly for almost four months.

The Genoa assize court has decided that the trial for the Prometeo operation cannot slow down even in the face of an infringed right to defence: the show must go on.

ALONGSIDE NATASCIA ON HUNGER STRIKE, IN COMPLICITY AND SOLIDARITY!
FREEDOM FOR NATASCIA AND BEPPE
FREEDOM FOR EVERYONE 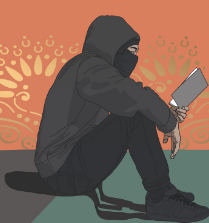